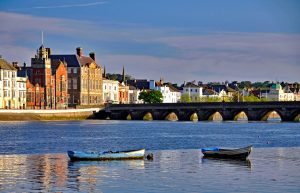 As someone who’s been a coach driver for nearly 40 years, I’ve seen a lot – but every so often, something happens that you don’t anticipate. Although I can laugh about it now, our excursion to Tintagel & Bude a couple of years ago was one of those times…..

We were staying at the Durrant House Hotel in Bideford, and one of our days out was heading further down the Devon coast with stops at Tintagel and Bude. It was pretty uneventful to begin with, as we tootled down the road, following the sat-nav on its suggested route to Tintagel via Boscombe.

And then the fun began.

There were a few cars coming the other way, so as usual it was all stop as we moved over as far as possible to let them pass on the narrow country roads. Then a campervan or two, which passed ok, if a little cosily.

The road got narrower….. and then we spotted a car towing a caravan coming the other way!

By this time there was a stream of cars & vans behind us, so we couldn’t reverse (and nor could the car driver!). Instead, he tried to squeeze past, but couldn’t quite get the caravan far enough across or at the right angle to get by.

20 minutes later, he was still trying….

We couldn’t open the doors to get out.

In the end, I climbed out of the rear emergency exit to assess the situation. There was only one thing for it…..

Together, the car driver and I unhitched the caravan from the car, and with the help of a friendly van driver behind us, pushed it 150 yards down back down the lane and into a side road. I nipped back to the coach and – good news – I could now get the coach past the car! 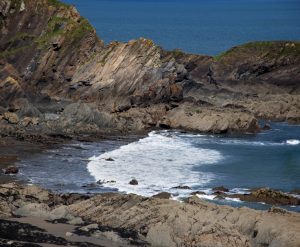 Away we went down the lane – a glance to the left as we went by saw a chap getting out of a car & scratching his head as he looked at the caravan we’d dumped in the side road – and wondering what we were going to face next….

Suddenly, a farm shop & cafe appeared around the corner, with a big enough car park for me to get into.

All the passengers jumped off for a coffee stop and I went in to speak to the owners about whether I’d get the coach through Boscombe to Tintagel. The advice was that it would depend where the cars were parked in the town – not what I wanted to hear!

There was only one thing for it. We’d lost so much time that it didn’t make sense to carry on to Tintagel and try to squeeze in both places. Instead, we made the decision to head back to the main road and go straight to Bude, so that our very understanding passengers could have their free time there.

Obviously, it was a concern what we’d face going back up the road. So, I hit upon a plan. I was going to call a taxi from Boscombe and send Sandie up to the top of the road to stop the traffic for me.

A lady in the cafe overheard our conversation and offered Sandie a lift, as she was about to leave. So, into the car Sandie hopped with the lady, her mother, baby and dog, and away they went back up the lane.

Soon after, Sandie called to say that she’d stopped the traffic at the top and what the last car down the lane had been. As soon as we saw it pass the farm shop, we were off – back up the lane to wider roads and a much less stressful journey to Bude!

Don’t worry, we remembered to stop & pick up Sandie at the top of the lane!