We spend a lot of time enjoying some beautifully scenic drives through the UK and beyond – after all, it was Ralph Waldo Emerson who wrote that ‘life is a journey, not a destination’. So with that in mind, we’re going to bring you an occasional blog series called ‘Scenic Drives by Coach’ which are some of our favourite and most stunning journeys. 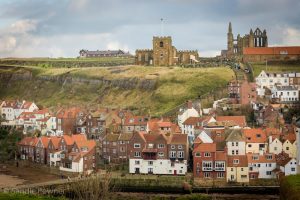 First up, it’s a circular drive from Scarborough to Whitby via the North York Moors.

Start Point: head out of Scarborough on the A170 towards Pickering

We begin our scenic drive travelling out of Scarborough on the A170, passing through open countryside with some panoramic views to the south. We pass several small and pretty villages as we drive along this pretty route, which takes about 30 minutes to our first stopping point, which is the pretty little village of Thornton Le Dale.

Thorton le Dale is a great place for a coffee stop! There is plentiful car and coach parking signed from the main road, and although there’s a slightly longer loop to get there by vehicle, once you’re parked there is an easy footpath through the trees and across the river straight into the heart of the village.

This is a proper chocolate box village, and probably the most picturesque (and most photographed) is Beck Isle Cottage, which has featured on many calendars and chocolate boxes over the years. To find it, simply walk back up the main road towards the church. As you cross over the bridge you’ll see a footpath alongside the river, and Beck Isle Cottage can been seen set back from the road on the riverside

In the other direction, you’ll also find Matthewson’s car auctioneers, which is famed as the stars of TV series Bangers and Cash. Their showroom normally has plenty of classic cars and some quirky motoring memorabilia lined up for the next auction.

Just three miles up the road from Thornton-le-Dale you’ll find the town of Pickering, which is another great place for a coffee stop with lots of little shops to explore. It is also the terminus of the North York Moors Railway, and you can join the train here if you prefer to travel by steam train across the moors to Goathland and Whitby. 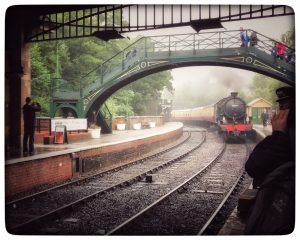 Our top tip: Shhhh – but we actually think the drive is better than the train! The railway runs across the bottom of the valley and scenic views are limited – whereas if you take the drive by coach, you’ll see stunning panoramic views across the moors which can’t be beaten!

Continuing our driving route, we take a right hand turn at the roundabout in Pickering, onto the A169 which heads across the North York Moors.

We enter the North York Moors National Park almost immediately, and the road takes a wonderful scenic route which loops and twists its way across the moors, which is particularly beautiful during August and early September when the heather is in flower. You can also often see the smoke from the steam train chugging along the bottom of the valley which runs roughly parallel with our route.

A few miles outside of Pickering, you’ll pass the Hole of Horcum, a huge hollow approximately 400ft deep and 3/4 mile across, created by the process of spring-sapping, where water from underground wells up and gradually eats away the earth grain by grain. What was once a narrow valley has, over thousands of years, widened into the cauldron you see today.

Or if you prefer – local legend has it that the Hole was formed when Wade the Giant scooped up a handful of earth to throw at his wife during an argument! 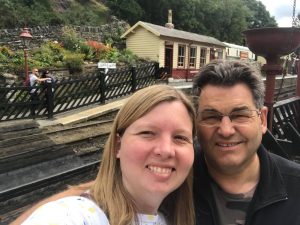 Continuing along the main road across the moors, we come to the turn for Goathland (if you’re in a coach, make sure you take the second turning). Goathland is best known as the home of TV series Heartbeat, and is one of the stops on the North York Moors Railway.

You’ll find the influence of Heartbeat still evident in the village – the pub has signs up saying ‘The Aidensfield Arms’, and Scripps’ garage is just along the road. There are often 1960s vehicles including a police car on show in the village as well. It’s a lovely place to stop and have a break on your drive

For the younger travellers, make sure you call in at Goathland Station – which was used as a filming location for Harry Potter and the Philosopher’s Stone, and snap a photo at ‘Hogsmeade Station’ (we took a selfie!).

We retrace our steps out of Goathland and back to the main road, continuing our journey to Whitby which is just 20 minutes further on. As we come down off the moors, we having stunning views of Whitby – nestled on the coast with the ruin of Whitby Abbey towering above the town.

We loop down to the centre of Whitby, and turn right onto the road which runs parallel to the river. Coaches drop off in front of the Co-op supermarket, and there is also harbour-side car and coach parking. 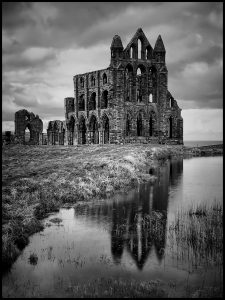 There is plenty to see and do in Whitby so you could easily spend a couple of hours here exploring the town. Cross over the river into the oldest part of Whitby, and wander past a variety of independent shops including those selling British Jet, which is only found in this area. You’ll find the path beginning to slope upwards, as you wander through the old town and find the bottom of the 199 steps which take you up to the ruins of Whitby Abbey, which is cared for by English Heritage, and well worth a visit.

Fun Fact 1: If you look carefully, you’ll see a little disc imprinted with the roman numerals to tell you how many steps you’ve already climbed!

Fun Fact 2: When you reach the top, you’ll see St Mary’s Church on your left. It’s well worth popping in and finding out a little more about this church, which unbelievably has seating for more people than Westminster Abbey!

Back in the centre of Whitby, you can take a short boat trip from the harbour side to explore the river area, step back in time onto the replica of Captain Cook’s Endurance and discover more about his expedition, and finally, enjoy a delicious lunch of local fish & chips!

After our visit here, we begin our journey back to Scarborough, taking the A171 route which runs roughly parallel with the coast. This route treats us to wonderful sea views as it winds along the coast, with the option to pop in to Robin Hood Bay on our way back

This quaint hamlet is worth a quick stop, but it’s important to remember that coach access is limited and must drop off at the official point. From here it’s a short stroll down to explore this pretty coastal spot and maybe grab an ice-cream. Don’t forget you’ll need to walk back uphill to where the coach is parked! 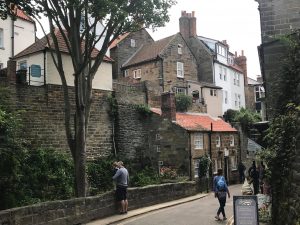 Leaving Robin Hood Bay, we continue back to Scarborough and usually round off the day with a quick detour along Marine Drive, which follows the coast along Scarborough’s North and South Bays. We can enjoy the quiet North Bay – popular with dog walkers – before rounding the headland and heading into the heart of Scarborough’s seafront, passing the beach, and the stunning architecture of the Grand Hotel and Scarborough Spa.

A fabulous scenic drive that can be extended with many stops to make a full day out or just enjoy the drive with a lunch stop at Whitby.

Have you taken our scenic drive around Scarborough, Whitby & the North York Moors? We’d love to know what you think!