Did you know there are said to be over 4000 castles in the UK? That seems a lot for a relatively small place!

In reality, castles can be anything from little more than a ruin, to the historic and world-famous Windsor Castle, home of our monarch with over 900 years of history.

Historically, they were built for defence and protection, and to remind everyone who was in charge by demonstrating their wealth and power. But today, they are great tourist attractions and it’s fascinating to be able to step back in time and see how people lived in the past.

We often visit castles on our coach holidays, and we’ve decided to write a blog in three parts, to tell you about some of our favourites!

In Part One, we’ll be looking at some of our favourite castles to visit in Scotland! Here we go! 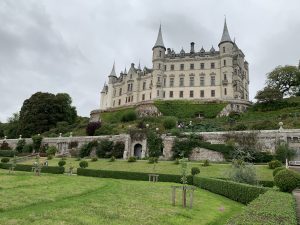 The quintessential fairytale castle with its turrets and spires, Dunrobin is like something out of a storybook!

Located in the small village of Golspie on the A9 north of Inverness, it is the most northerly of Scotland’s Great Houses.. It has been home to the Earls and Dukes of Sutherland since the early 1300s, making it one of Britain’s oldest continuously inhabited houses.

As well as the stunning castle, remodelled by Sir Charles Barry in the 1850s (who also designed the Houses of Parliament), and the beautiful gardens, our top tip is to make sure you check out the daily falconry display which takes place twice a day between April and October.

The resident falconer will demonstrate different hunting methods with a variety of birds of prey, treating you to super aerobatic displays!

Glamis Castle is most famous for being the childhood home of HM Queen Elizabeth the Queen Mother, and the birthplace of Princess Margaret, and is a popular visit to discover more about the Royal Family and its connections to this part of Scotland.

All access to the Castle is by guided tour, with knowledgeable guides who will fascinate you with facts, myths and history of this stunning building.

However, you may also know that Glamis is mentioned in Shakespeare’s ‘Scottish Play’ and the titular character Macbeth is Thane of Glamis as the play begins. Glamis Castle has embraced their Shakespeare connection with a superb sculpture trail, where scenes from the play have been carved from trees grown on the estate. Well worth a visit! 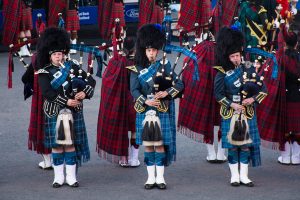 It’s impossible to write a blog about Scottish Castles without mentioning the most famous of them all – the iconic Edinburgh Castle! Soaring above the Scottish Capital, Edinburgh Castle is truly magnificent, and famously hosts the Edinburgh Tattoo on its concourse each year.

The Tattoo draws visitors from across the globe, and is famous for the iconic moment when the Lone Piper stands on the Battlements and plays the haunting bagpipes at the finale of each evening’s performance.

But the Tattoo isn’t the only reason to visit Edinburgh Castle. Built atop an extinct volcano, it has a colourful history and has the distinction of being the most besieged place in Europe. It has a long history as military garrison, royal residence, prison and fortress – there is so much to discover.

Our highlights include the Honours of Scotland (Scottish Crown Jewels), the Mons Meg six-tonne siege gun and the Stone of Destiny.

Possibly a lesser-known castle, and definitely one we hadn’t heard of until we visited it a few years ago!

Duart Castle is situated in a beautiful location on the Isle of Mull, overlooking the Sound of Mull & Loch Linnhe, and has been the seat of Clan Maclean for 700 years. It is strategically located and the thickness of its walls varies – the more vulnerable land-side has walls 29 feet high and 10 feet thick, whereas on the sea-side its walls range from 5 to 9 feet thick.

Our Fun Fact is that although Duart Castle is the traditional seat of Clan Maclean, it was surrendered to the Earl of Argyll in 1691, and demolished. For over 200 years it was a ruin, until Sir Fitzroy Donald Maclean, the 26th Chief of Clan Maclean, bought the castle back in 1911 and set about restoring it, at the age of 76. He probably didn’t think he would live to see the results, but he actually lived another 25 years and died aged 101.

It has also been used as a filming location for the film Entrapment, starring Sean Connery & Catherine Zeta-Jones, and TV series Buffy the Vampire Slayer

The beautiful Floors Castle was built for the Duke of Roxburghe, and has been home to the family for the last 300 years. It was originally designed as a plain but symmetrical Georgian country house by William Adam in 1721, but in 1837 the Duke invited architect William Playfair to remodel. He was determined to create a fairytale castle and created the stunning building you see today.

Located in the Scottish Borders, Floors Castle is an estate house rather than a fortress, and the name is thought to come from the French ‘fleurs’ meaning flowers.

It has also been a filming location, most famously in the 1984 movie Greystoke: the Legend of Tarzan, Lord of the Apes. 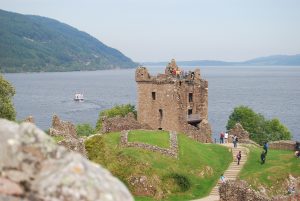 When you think of Loch Ness, you think of Nessie. But after Nessie, you probably think of the ruins of Urquhart Castle which dominate the western shoreline of the loch.

This castle is steeped in turbulent history, and there may have been a residence on this site as early as St Columba’s visit of 580 AD. It saw much military action from the 1200s to its demise in 1692, when the stronghold was blown up by the last soldiers who marched out of the garrison. In the 1300s it came under the control of Robert the Bruce in his battles against the English, changed hands between Crown and Clan Macdonald multiple times, and was eventually awarded to Clan Grant in 1509, who restored it and built the five-storey tower house, Grant Tower.

After its abandonment, Urquhart Castle soon fell into decay, with the tower being partially destroyed by violet storms. In the 1800s, the castle came to be seen as a glorious ruin in a magnificent setting – and today it is one of the most visited castles in Scotland.

You can visit by road as part of your journey exploring the Highlands, or take a day trip on the Loch and arrive by water to see the true majesty of this castle towering above the mysterious loch.

And of course – keep an eye out for Nessie!