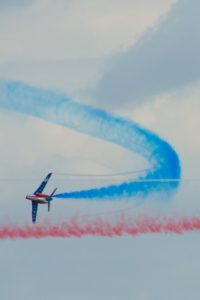 One of the most memorable trips we’ve done is taking the Normandy veterans back to France for the D-Day commemorations. It’s always a moving experience and a privilege to be able to go with them.

But on one occasion it was memorable for an altogether different reason!

It was the 7th June. We’d done all the formal D-Day events and our group had decided they wanted to go to Arromanches for the afternoon. It was a fantastic surprise when we got there to find a celebratory air show taking place, and we were lucky enough to see the Patrouille de France (French equivalent of the Red Arrows) performing aerobatic stunts.

Departing Arromanches after our visit, as you can imagine, the traffic was pretty heavy. We were following the sat-nav out towards the main road when suddenly we came to a stop. Three cars had double-parked and there was no way the coach could get through. A non-stop queue of cars behind us meant there was no way we could reverse out to find a different route. What to do??

I jumped out of the coach to take stock of the situation with our group organiser. We had two cars to the left next to a pavement, and one on the right parked against a wall.

We managed to push the front car forward a short distance to give enough space between it and the car on the right so that the coach could get through. One down.

But what about the second car that was directly opposite the car on the right? There was only one thing for it – we would have to lift it into the pavement!

The good thing about this being a Normandy Veterans trip was that the age group onboard the coach was a little more diverse than usual, as many veterans were travelling with their children and grandchildren.

So it was that all the sons & grandsons piled off the coach and assembled at one end of the car, along with a couple of passing Frenchmen.

We shifted the car slightly to the left. Then we all stood up, walked around and assembled at the other end of the car

Then it was everyone back onboard the coach and we crept through the gap between the cars, with a cheery nod to the gendarme who had been directing traffic at the next junction just 50 yards away for the entirety of our adventure!

I’ve always wondered what the car owner thought when he returned to the car to find it up on the pavement instead of on the road.

I do realise this is one of those stories that might make you wonder if it actually happened….. which is why it’s great to be able to say that we had a dashcam running and so have video footage of the whole thing!