One of our popular one-night breaks is to the fantastic open-air show called Kynren, which takes place just outside Bishop Auckland each summer.

Kynren is one of those shows that words just don’t do justice to – you really need to see it to appreciate how utterly amazing it is. In short, Kynren is a grand, open air performance retelling 2000 years of English history. 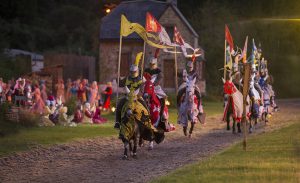 That sounds as though it might be a little drab – but it’s actually a non-stop performance with plenty of action – from stunning horses charging across the stage, to knights jousting, battles and sword-fights, and (my personal favourite), the country life section when geese, sheep and cows parade across the arena in front of the audience.

Pieces of set appear throughout the performance, emulating the development of the setting over time from simple camp to abbey and stately home. There is a ship which emerges from the lake as if by magic, and a royal barge that sails by. Finally, a triumphant ending with fireworks to celebrate.

We began our weekend with the journey up to our hotel, stopping in Ripon for some free time to explore the town. At the hotel, we had an early buffet tea before heading to Bishop Auckland for the performance of Kynren, which is timed to end as night falls for the fireworks.

On Sunday, we began our homeward journey with a visit to Fountains Abbey & Studley Royal Water Garden enroute. Fountains Abbey is a fascinating place, originally a monastery which fell foul of Henry VIII’s Dissolution and became a ruin. The Studley Royal Water Gardens are a UNESCO World Heritage Site and are quite stunning to walk around and explore – in fact our passengers said they could have spent much longer there!

This year was the third time we’ve arranged a one night break to Kynren, and we had passengers onboard who have joined us every year because they enjoy it so much!